Scroll down for english

A couple of years ago the Swedish editor of Guinness Book of Records said that this stencil painting was then probably the largest in the world but they didn’t have a class for stencil paintings… Red custom paint on granulated roofing felt. 27 x 36 meters size.

The article below describes the project and when the famous swedish advertising guru Henri Holmgren was introduced by his competitors who editing the magazine Papper (Paper), I was crowned by them as the master of stencil painting: 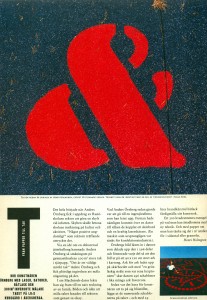 The following text is written by Henri Holmgren, cartoon expert. The sign above is identical with a part of Donald Ducks papers head.

From paper to roof – It all started when Anders Örnberg was commissioned by the rector of Runö school to produce a sign for the school entrance. The sign would signal the school’s focus on cultural activities. ”Something youthfully positive” as the rector appropriately put it.

Via an idea for a large decorated balloon, Anders ended up on the schools’ 300 sqm felt paper covered roof. ”That’s a very dark roof” thought Örnberg and was suddenly inspired to paint something on it.

On his Macintosh computer he sketched his way to a naive illustration of a family. The image and the idea to paint the roof were faxed over to the rector who immediately gave the OK.

What Anders Örnberg then did was to go to an engineering firm he had found. They had access to a computer controlled laser cutter (the machine was originally intended for the confection industry).

Örnbergs image was scanned and divided into 296 parts. Each part was then enlarged to fit a 90 x 120 cm sheet of card. Sheet after sheet was placed onto the cutting table and with a ”clear green scary beam which resembled pure kryptonite” the computer cut 296 stencils in the same number of Invercote sheets.

After that it remained only for the artist to put on his blue overalls, lay out the numbered stencils on the roof and with 29 litres of fire engine red boat paint complete his artwork.

A 300 sqm example of what can be done with the latest technology. And with paper if one can think in square metres instead of pages and grams. 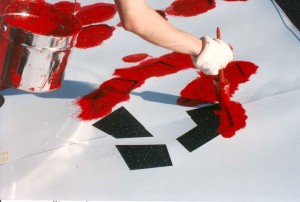